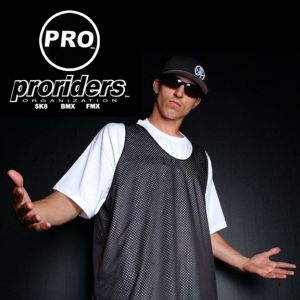 My name is Chris Gentry. PRO or Pro Riders Organization began in August 2002 at the X Games VII in Philadelphia, PA when an impromptu rule change resulted in myself and some other Vert skaters being left out of the "vert doubles” and “best trick” competitions. I and my partner Mike Crum had won the Silver Medal for second place in the “doubles” competition the year before in Philadelphia behind the team of Tony Hawk and Andy McDonald.

Angered by the changes, we called together a majority of the Riders who then put our issues and the changes we wanted in writing, “Ink and Paper“. After having each Rider sign it, we presented the issues to the event organizers and the rules were changed to accommodate the Riders.

From that moment on, it was obvious the Riders would have to stick together under one roof in order to have our voice heard in the world of Action Sports.

This collective voice serves to PROtect, PROvide and PROmote the sports, athletes and the interest of our members, now and forever known as the Pro Riders.

Since 2002, PRO’s membership has grown to over 100 of the top professional athletes in the sports of  SKB, BMX and FMX.

The wide umbrella created by Pro Riders Organization has tremendous protential to positively affect and shape the lives of literally millions of the World’s youth, as well as create numerous jobs and business opportunities for the Pro Riders and many others.

“Find us on Facebook to discover more about Pro Riders Organization –