American BMX started in the late 1960‘s and early 1970’s because of youngster’s imitating motorsport motocross stars like Evel Knievel. The 80′ and 90’s brought Pioneers like Bob Haro, Matt Hoffman, Dennis McCoy, Dave Voelker, Dave Mirra just to name a few legendary Riders who paved the way for the next generation of Dirt, Vert, Street, Mega,to whatever you want to BMX stunt on and still continue to ride. 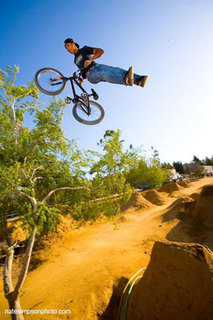 Now days, in 2009, Pro Riders like TJ Ellis, to the right, are innovating the sport of BMX.  TJhas more tricks than Halloween night. He lives in Riverside, Ca. and rides at Da Compound. Check out the park and TJ Ellis ride there anytime he’s in town.

BMX Vert Pro Rider Simon Tabron, to the left, is one of the top BMX Riders in the world who has dominated in the top three for many years now. 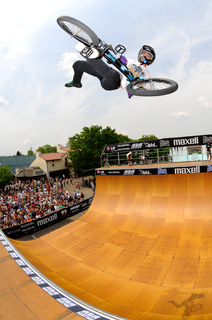 He is a pioneer in the shaping of the Pro Riders Organization beliefs and mission set forward. Simon is one smart guy with a dangerous bag of tricks like his infamous 900 at the push of a button or any other variation you can think of. 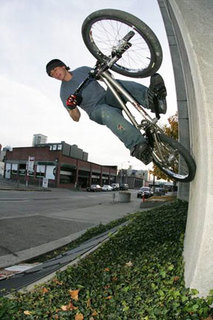 BMX Street Pro Rider Dan Sieg is a BMXspecialist out in Greenville, NC., where he rides everyday with the “best of the best”. Greenville is a BMX haven where all the best riders live and is the spot to be if your looking to ride BMX. Other Pro Riders living in that area that are ripping it up are Allan Cooke, Dave Mirra, Austin Coleman, Quinn Semling, Rob Darden, Allan Cooke, Austin Coleman, Josh Harrington, Diogo Canina and many others. The scene is big and getting bigger. It’s a small town making a major impact on the Action Sports scene.

Inspiration & Commitment Behind the Collection

On June 22, 2007, while attempting a double back-flip, Pro Rider Stephen Murray crashed while competing at the Dew Actions Sports Tour, in Baltimore, Maryland. Doctor’s would later report, Stephen had crushed his 3, 4 and 5 cervical vertebrae, suffered severe damage to his spinal cord and the front of his vertebrae had been shattered. Stephen Murray, professional athlete, father & sole provider of two young boys … now paralyzed from the shoulders down.

Pro Riders Organizationis committed to ride for Stephen Murray’s cause!

Just a few of our BMX members …